HOW TO UNINSTALL MICROSOFT'S SPY UPDATES FROM WINDOWS 7/8/8.1

HOW TO UNINSTALL MICROSOFT'S SPY UPDATES FROM WINDOWS 7/8/8.1 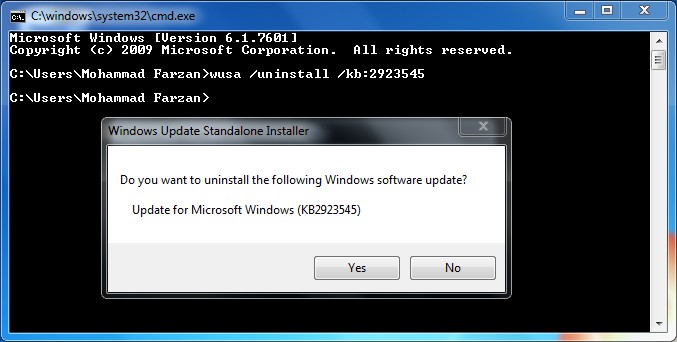 How To Uninstall Microsoft's Spy Updates From Windows 7/8/8.1

Back at the beginning of this month, we reported about how Microsoft has planned to spy on its users by releasing their latest operating system Windows 10. Many didn't know that this latest version of Windows has a capability to silently capture and send user data to Microsoft servers, without user's consent. (...) But it seems like Microsoft's goal to snoop on its users is so strong that they have now released several updates for their older versions of Windows that provide them with a capability to spy on Windows 7, 8 and 8.1 users too. The two recent Windows updates having the identification numbers KB3075249 and KB3080149 grant a capability to Windows to capture and send your data to the company's servers. So, once both of these updates are installed on your computer, then Microsoft may possibly spy on you in a similar way Windows 10 does, and all your data will be sent to Microsoft servers.

That is not all. Privacy-conscious users of Windows have pointed out that there are numerous other updates released by Microsoft that either grant the company access to your data or forcefully updates your existing version of Windows 7, 8 or 8.1 to the latest operating system release, Windows 10:

If you want to stick to Windows 7, 8 or 8.1 and want to remain untracked then we recommend that you stay away from the following updates:

If you are still using Windows 7 or Windows 8 and want to keep your data away from the access of Microsoft then we will highly recommend you to stay away from the above-mentioned updates. But you must be curious to find out if the above updates are installed on your computer. Don't worry, head over to the next section where we have a step by step guide to finding out whether these updates were installed on your computer, and if they are then how to uninstall them.

Read the rest of the article on the original site for the update removal procedure. Note that the the article's author chose to use the Command Prompt instead of the normal uninstall method because some of these updates simply will not show on the list of installed updates.

IMPORTANT: after you uninstall these updates, the next time you check for updates they will show up again. To avoid reinstalling them by mistake, right click on each of them and select "hide update".

Script to uninstall Microsoft's spying updates from Windows 7/8/8.1 (by Pedro-NF)

1- Copy all the text below into any text editor (Notepad, WordPad, etc.) and save the file as ANYNAME.BAT. Make sure the file name ends with .BAT.

2 - Right click on the file you just saved and select Run as administrator.

3 - After the script has done its work and the command line window closes, restart the computer.

IMPORTANT: my advice is NOT TO INSTALL any updates released in 2015 and later, INCLUDING Microsoft's mostly useless "security updates". They have been inserting spyware code even into the security updates, and stupid people will eventually get infected anyway, so don't install them and don't be stupid.

VERY IMPORTANT: after you uninstall these updates, the next time you check for updates they will show up again. To avoid reinstalling them by mistake, right click on each of them and select "hide update".

EXTREMELY IMPORTANT: you MUST install the update released in May 2019 that patches an absurd vulnerabilty in the Remote Destop Protocol that Microsoft "only" took SEVEN years to discover. You can download that update from the Microsoft Update Catalog: XP & Server 2003 SP2 / Vista & Server 2008 SP1 / 7 SP1 & Server 2008 SP2.
https://www.fightdogmeat.com
http://www.turnmeup.org
http://dr.loudness-war.info

Here's Why Windows 7 Is Nuking Your Background Image, And How You Can Fix It

"A recent security update appears to be messing with some Windows 7 PCs by replacing the custom background image with an all-black wallpaper. The timing of the mishap comes on the heels of Windows 7 officially entering retirement, leading to speculation that Microsoft is petty towards people who refuse to upgrade their OS to Windows 10.
(...)
Users discovered the actual culprit is the Stretch setting in the Desktop Background options menu. This allows users to stretch an image to fit the entire screen, but for whatever reason, KB453410 broke the functionality."

Absolutely not on purpose...